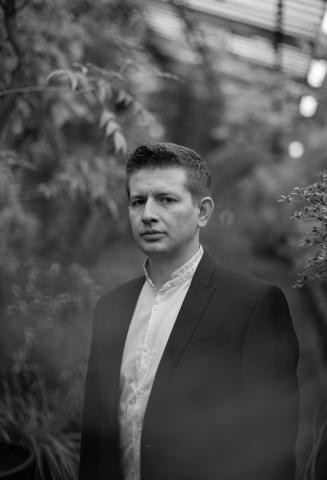 After graduating from the Russian State Institute of Theatre Arts — GITIS situated in Moscow, Sergej Morozov worked as the assistant director (AD) in The Bolshoi Theater and The Novaya Opera Theatre. He was collaborated with such remarkable artists as Dmitri Tcherniakov, Arno Bernard, Oliver Mears, Dmitry Bertman, Georgy Isaakyan, Igor Ushakov, Konstantin Bogomolov, Hartmut Schörghofer, Markellos Chryssicos, Jan Latham-Koenig, Dmitry Jurovsky, Fabio Mastrangelo, Ivan Velikanov. In season 2018/2019 Sergej curated theatrical programs in The Cultural center ZIL, Moscow. He was the curator of the Park Gallery in 2020 and executive producer of the association «Four Museums» in 2022.

Sergej is concerned about the institutional intercommunion. In September 2021 in Izhevsk the laboratory for the creation of the text opera «General's House: City Opera» took place with the participation of the citizens. This participatory project was implemented with a grant from Vladimir Potanin Charity Foundation by Izhevsk Museum and the Center for Contemporary Dramaturgy and Directing, Izhevsk. In 2020 RAUM SPACE Festival of contemporary art took place both in Kaliningrad and in Berlin supported by the German Ministry of Foreign Affairs. He made a series of performative events «studio youth union» as the part of educational program of the exhibition «The Youth Union» in The Jewish museum and center of tolerance, Moscow. Composer Igor Yacovenko was the resident of this program and wrote the vocal cycle based on the Vladimir Mayakovsky heritage. The Recreation Festival was very successful eight-days festival, consisted of theatrical, musical, educational programs and exhibition of contemporary art. The Recreation Festival was the collaborative project of B-A-Z-A Institute and Cultural center ZIL. In 2019 Sergej Morozov produced performative laboratory «Out of joint», which was dedicated to the theme of the time and modernity. It was second cooperation of Cultural center ZIL and The Institute of contemporary art B-A-Z-A. The list of curators of this performative laboratory included art critic and philosopher Boris Klushnikov, theorist Egor Sofronov, dance curator Katya Ganushina and others.

Sergej pays special attention to contemporary music in the theatre. He collaborated with the vocal theatre «La Gol» as co-director and performer. Sergej was initiator of the creation of a new pieces of contemporary music: opera «Marya Stavrogina» (2021), musical «Leonard and Susanna» (2019), opera «Imprints» (2019), musical «Netochka and The Christmas» (2014).

In September 2021, the world premiere of «Russia : Today», a documentary opera for five voices and electronics, took place at the Vaba Lava Theater in Narva, Estonia. Composer Eugene Birman and librettist Scott Diel created an impressive landscape of opinions from the residents of Russia's borderlands. Sergej was the stage director of «Russia : Today». Oleg Gudachev's opera Marja Stavrogin was premiered at the New Space at the Theater of Nations as part of the «Dostoevsky 200 Opera Lab» in 2021. Sergej was the librettist and director of this work based on Fyodor Dostoyevsky's novel «Demon». In 2019 the new chamber musical «Leonard and Suzanne» by Alexander Margolin was premiered. The story is based on the biography of singer and poet Leonard Cohen. In 2019 Sergej directed world premier of the opera «Imprints» by Anna Pospelova. This site-specific opera production was the part of Archstoyanie Festival in Kaluga region. In 2018 Sergej curated large performative event based on the text of the Constitution of Russian Federation. The project called «Constitution» was produced in Meyerhold Center Moscow. In 2017 Sergej staged the opera «Arianna in Nasso» by Nicola Porpora in Kammeroper Wien (Theater an der Wien) in collaboration with Ksenia Peretrukhina and Alexey Lobanov. Sergej was an initiator and producer of «Diet Mountain Due» exhibition in the foyer of Kammeroper Wien. This exhibition was curated by Andrey Parshikov.

In 2020 Sergej and Danish stage designer Karin Gille was the finalists of Camerata Nuova opera competition in Karlsruhe, Germany. The performative project «Constitution» was nominated for Sergej Kurechin’s Award in 2019. Sergej Morozov and his partner Sasha Alekseeva are the team-finalist of the prestigious international competition Ring Award’17. The team presented its own version of the first act of Donizetti’s «Don Pasquale» in Schauspielhaus, Graz in June 2017. Apart from this Sergej is the twice prize-winner of The State Grand for Creative Youth founded by The State Theatrical Union, the winner of The ZIL Competition of Creative Project in 2013 and the finalist of II International Competition for Young Opera Directors Nano-Opera in 2015.

As an artist Sergej works on problematics of the sound objectivisation. The subject of his interests lays in the field of phenomenology of the voice and the role of the voice as the medium in contemporary art. With the support of the Cosmoscow Foundation, Morozov released video series titled «The Voice in Art» in 2020. Sergej Morozov develops publishing within the framework of his curatorial projects. Sergej is the invited tutor in HKBU, HSE University and Moscow International University.